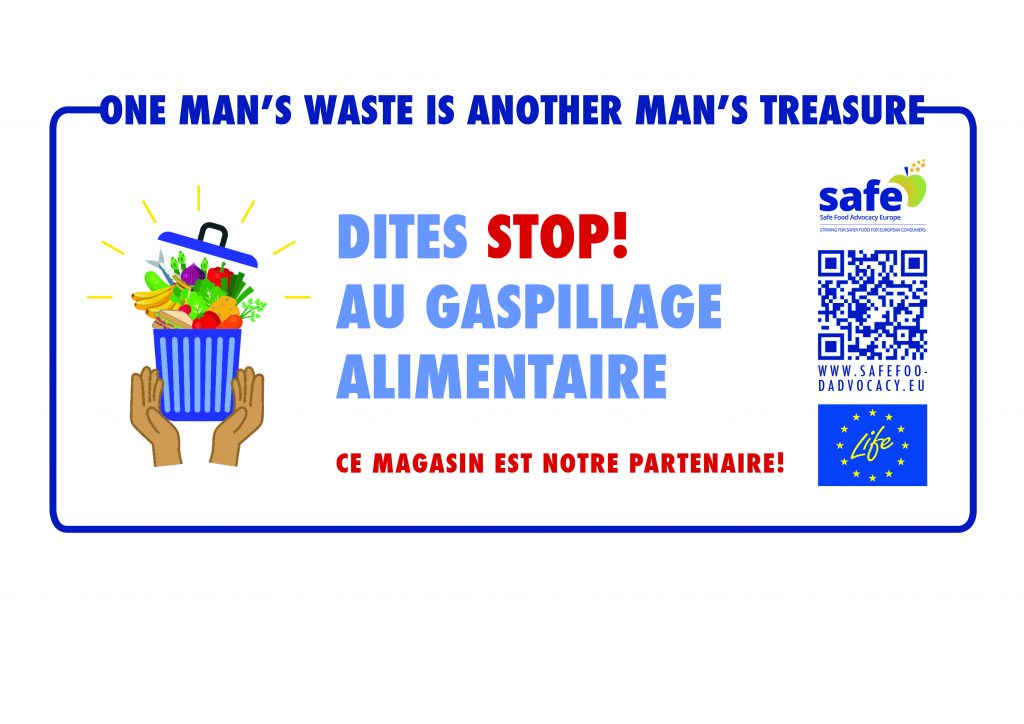 Food waste is a vast environmental and climate issue: it globally amounts to the vain occupation of 30% of the world’s arable land, ranks as third CO2 top emitter after the USA and China and has a significant blue water footprint. SAFE intends to tackle this issue at EU level with a prime focus on urban communities. At EU level, through advocacy aimed at securing a proper measurement methodology for food waste.
In urban communities, SAFE has launched an awareness raising campaign aimed at promoting more responsible food consumption patterns by reducing waste and increasing redistribution.

To fight food waste at the retail level, SAFE launched the “One Man’s Waste Is Another Man’s Treasure” in the City of Brussels in 2018, a pilot project designed to ensure a long-lasting and sustainable food surplus redistribution in the city. The project regrouped local authorities, hotels, shops and restaurants in a common network where food surplus was centralized and then redistributed on a weekly-basis to charity associations in Ixelles, Etterbeek and Bruxelles-Ville. The campaign 2018-2019 was supported by LIFE and Bruxelles Environnement – Leefmilieu Brussel.

The campaign was relaunched in 2021 in Brussels and lasted for the whole year, supported by LIFE Programme. SAFE collected food surplus from shops such as Färm Globe in Uccle, Sequoia in Watermael-Boitsfort, and Dam’Tartines in Ixelles, twice a week to deliver to associations who help the people in need. They included Community of Sant’Egidio Brussels, Belgium Kitchen, which is a citizens’ initiative to help refugees, and Freego, a common fridge for who is in need in Etterbeek. Differentiating from the 2018-2019 campaign, SAFE worked with ‘Dioxyde de Gambettes’, a transport company using cargo bikes to deliver the food surplus in order to ensure an environmentally friendly mean of transportation.

Since December 2021, SAFE has teamed up with Happy Hours Market, a Belgian start-up that fights food waste by offering consumers unsold food from supermarkets at a reduced price, to redistribute the remaining food to charities across Brussels. Read more about the collaboration here.