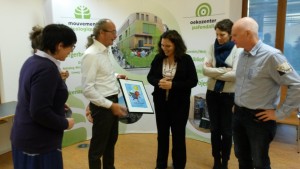 SAFE – Safe Food Advocacy Europe is non-profit independent European organization based in Brussels striving for safer food for European consumers. Along with other participants (SAFE members) of the working group, SAFE intends to tackle this issue by urging the European Commission to walk the talk and act on article 36.3 of the Regulation (EU) 1169/2011 Food Information to Consumers, which clearly states that: “Commission shall adopt implementing acts on the application of the requirements for food information provided on a voluntary basis to the information related to suitability of a food for vegetarians or vegans“.

To this effect, Participants of the second European Vegan Working Group met on the 18th of November at the Oekozenter Pafendall in Luxembourg. It gathered several national associations representing vegans and vegetarians in many European States (Austria, Belgium, Croatia, Denmark, Finland, France, Italy, Luxembourg, Spain, Sweden and the United-Kingdom), Luxembourgish MEP Claude Turmes (Group of the Greens, European Free Alliance) and Christiane Schoetter of the Luxembourgish Department of Food Security.

As all members of the Vegan Working Group agreed on the necessity to implement clear vegan and vegetarian legislation in the EU, they arranged for SAFE to highlight the need for an EU legislation, which will be brought to the European Commission by MEP Claude Turmes. Stopping to eat animal products in the EU could then soon become easier.

Vegetarianism and veganism are on the rise, yet knowledge about them remains dim

Be it for human health or animal welfare concerns, or because they want to lessen the numerous environmentally and socio-economically damaging effects of a food system pushing towards meat-overconsumption, more and more people in Europe are shifting to a vegetarian or vegan diet. Nonetheless, what exactly both those terms imply is not clear to most people, even sometimes vegans and vegetarians themselves. Can a cheese made using animal enzymes extracted from a dead animal be called vegetarian, for instance. Such uncertainties and the absence of a clear legal framework allows manufacturers to assert the vegan or vegetarian nature of their products without much control, leaving consumers no other choice than to believe them.

Local initiatives to change this situation have however arisen in a few countries, with local vegetarian or vegan associations sometimes creating vegan or vegetarian logos, assessing products indeed comply with the criteria they have established. Yet, this is not the case in all EU countries, while there are sometimes competing logos in some countries, whose standards may well be different, leading to more confusion amongst consumers.

If you want to know more about the Vegan Working Group contact us.